Sorry I'm a bit late with this. Didn't get a chance to finish out my thoughts on Friday night and then was meeting up with some fellow fans at a little get-together on Saturday.
While I did watch the east coast feed on Friday, these notes were taken during the live broadcast.

I was a nervous wreck in the hours before but despite the show breaking my heart (Boys!!!), I enjoyed this wrap up to Season 7. :) 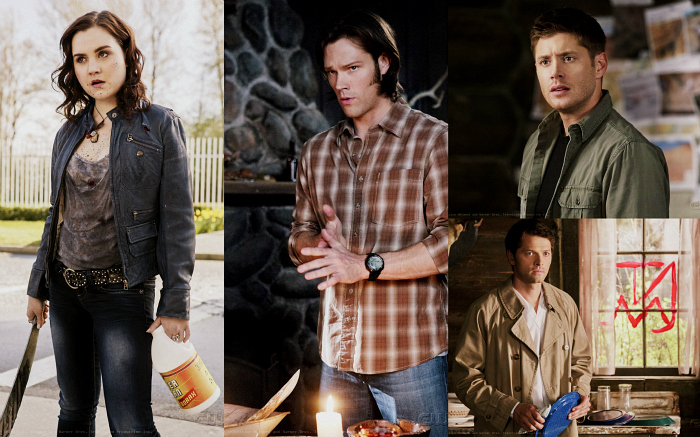 Carry On Wayward Son!!!!! Can’t have a season finale without it! :D

So Dick knows all. Figures.
Nice little meeting with Crowley here.
Crowley: You know what I like about you?
Dick: Lack of pretension?
Crowley: You're smarter than you look.
Dick: Oh now you're just flirting.
Hee!
Dick offers that the demons can run wild...in Canada. Heh.
But the Levis want America ‘cause we’re fat.
In exchange Crowley hands over ordinary demon blood to the boys.
You gotta love Demon paper work. :P

The boys debating about their bad plan.
Sam: We should call Castiel.
Dean: Dude, on my car, he showed up naked, covered in bees.
Sam: Yeah, I am not really sorry I missed that.
LOL
They hear on the radio that Dick is at Surcro Corp.

Dick and Crowley are still going over their deal. This is gonna take a while.

The boys dig up the bones of Sister Mary Constant.
“Let’s bone this nun.”
Oh, Dean...

Damn. That paper’s gonna be a bitch to triplicate! Hee!

The boys summon Crowely and of course he doesn’t show up.
But Meg’s there.
“Emo boy.”
LOL
Love Cas being all mello out in the car listening to Don McLean.
And Dean needs a moment to deal with him. Heehee!
Cas is such a trip now. Talking about monkeys and lipstick. o.O
Uh oh....Cas hadn’t heard anything from the garrison. They’re gone. Killed by the Levis.
They took Kevin, but Cas doesn’t wanna get involved.
Then Meg notices the boys summoned Crowley....who then shows up. Uh oh....

Crowley won’t let Meg leave. He then meets the new Cas...not what he was expecting.
Love the facial exchanges between Crowley and Dean.
He just called Cas
“Sparkles”
. LOL
And he offers up his blood...and the deal he made with Dick to give them fake blood. He assures them this blood is his....hmmmm.
Crowley has plans for Meg....uh oh. But he’s leaving her for Cas at the moment ‘cause the boys need Cas to get Dick. (Ok, that sounds totally wrong. :P)

Female!Bobby...and he accidentally touches pure iron. Ooops.
He gets spit out of the gal’s body.....but he gets back in.

So we see Kevin, still being held prisoner....in comes Polly....who’s not all there.
Twizzler! Heehee!
The boys do the ritual with the blood and bone.
No words to say, just pour the blood on the bone....no thunder and lightning.
Then Cas pops in...with sandwiches for the boys. Awwww.

So Dick has the arm of the original Dick Roman.....hmmmm.

A dress is brought for Polly and she’s told to get dressed.
Kevin finds a means of escape...

“Last time we were in one room was inside that angel.”
Heh.
So these are all the original Levis? He’s outlining their plan...
Labor all out west....Breeding program in Florida.
Ooops. Kevin’s been caught....but he did hear some things from the board room.
Polly is brought in.

The boys arrive outside the building....and tap into the surveillance cams thanks to Charlie. :)
They see there are multiple Dicks in the building. Crap!

Dick says they’re creating the
“perfect meat”
.
He gives Polly a shot.....nice mouth foaming and she’s dead.
The drug targets the traits they want to breed out.

Meanwhile, Sam spots female!Bobby approaching the building.
He goes after him despite Dean’s protests.
“Shut up!”
Hee!

Sam confronts female!Bobby and she attacks him.
Noooo!!!!! Don’t do it Bobby!
She’s choking him! Then Bobby sees himself in the window...expells out of the woman.

The boys, along with Meg and Cas are back at the cabin.
Cas is afraid of messing everything up again.
Dean says he doesn’t get to back out.
“Clean up your mess!”
Cas’s answer is that they should play Twister. LOL
Meg says Cas knows the Levis....he can identify the real Dick Roman.

Heh. Dean can’t read the tells of the Dicks because they’re all the same.
Bobby pops in....apologizes. Knows he needs to be gone, for good. :(
Says going vengeful is like having
“an itch you can’t scratch out.”
Wants the boys to go after Dick...not for revenge, but because it’s the job.
“And when it’s your time....go.”
Awww....this is sad....Bobby says his goodbye to the boys.
Dean tosses the flask into the coals.
We don’t see Bobby go....only the boys’ faces and a fiery glow. :(
Cas was watching, too.

Cas and his board games...
Dean says he needs a wingman....run a little errand.
Baby!!!! I see her under the tarp. :D
Cas figures Sam & Dean will die in this battle, sees that he’ll be resurrected again which isn’t as great as it seems.
Dean says none of them are lucky. Cas notes Dean’s forgiveness. Awww. :)
Dean says Dick knows they’re coming, so they’ll announce themselves....big. Heh.

Baby!!!! I love this song and I’ve wanted it used on the show for soooo long!!!! :D
Right through the sign! Damn.
Meg was driving?!?!? Whoah. Oh, well. This is war after all.
She’s taking all those bullets too.
Meanwhile the boys are sneaking in.
Cas is w/Dean....helping ID the fake Dicks.
Uh oh...Meg’s been caught by demons.

Sam finds Kevin....who says they need to destroy the lab.
Dean & Cas have found the real Dick.
Love how Cas puts himself between Dean and Dick.
The bone doesn’t work....but the 2nd one does!
Awesome!
Sam & Kevin show up.
Uh oh....that can’t be good. He’s pulsating like a bomb about to go off. And he explodes.
Black goo all over, I bet. Ewwwww.

Where’s Dean....and Cas????
Crowley...he’s got the place surrounded.
The other Levis are still out there...damn. Now Sam has them to deal with.
Crowley takes Kevin away.
Crap. Sam’s alone. :(


A good ending to the season. Was it one of the best finales? Not really, but that's okay.

I did not see that ending with Cas & Dean in Purgatory coming. I know there are others that did. The unseen creatures with the red eyes slowing encroaching on Dean was quite creepy! Why did Cas leave him??? And being an angel, can Cas easily get out of Purgatory? Maybe not. Meanwhile, poor Sam is left alone with a building surrounded by Levis and demons. I can barely begin to speculate how he's going to retrieve his brother (and Cas, if need be), but one thought I had was that he could go to the Alpha Vamp for help. He's from Purgatory, after all. I doubt he'd help Sam, but who knows? Let's face it, Sam has very few allies left: Jodi and Garth are the only ones I can think of.

I don't mind the boys being separated for a short time. Several episodes would be fine. It would be interesting to see how they deal being apart and trying to not only survive but find one another. Will Sam show shades of the unfeeling killer we saw in "Mystery Spot"? Will Dean be able to avoid being ripped to shreds by old foes in Purgatory? There are so many storytelling opportunities they've opened up for Season 8.

This season finale reminded me a lot of S3's "No Rest For The Wicked" with Dean going to hell. Similar idea, though I'm hoping we'll see a lot of Purgatory next season. We saw very little of what hell was like. I can only imagine Dean will have some flashbacks to his time there, especially if he should run into some old friends like...Alastair. o.O Wouldn't that be an intense reunion?

Oh, and that whole bit with Dick pulsating and everyone just standing around watching. WTH was that about??? Surely that was a sign to start heading for the nearest exit? Run you fools!!! Kevin sort of looked like he was ready to run, but the others were just standing there staring! It also took too long IMO (which made them sticking around even more silly). One pulse, maybe two and he should've exploded into black goo. But if they had run then Dean & Cas wouldn't have ended up in Purgatory etc., etc. but surely there was a better way to edit that scene.

Also (see, I knew I'd forget some things - see note at the end), I wish we'd had that scene from the promo with the nice "Don't get killed" exchange. I was really looking forward to that part of the eppy and it never happened. :( My only hope now is that we get it as a deleted scene on the DVDs. *crosses fingers*

As for the other players in our story:
:: Kevin - Not sure we'll ever see him again. Attempting escape from Dick's building is one thing, but escaping from the king of hell is another entirely.
:: Meg - Crowley seems intent on making her suffer, but she's always been a survivor. I'm sure we haven't seen the last of her and I'm happy about that.
:: Bobby - How often does a character get a 2nd send-off? This goodbye didn't have quite the emotional punch of the one in "Death's Door" and I kind of wished we'd seen how Bobby went to whatever great beyond, but I'm also hoping this isn't the end of him on the show.
:: Crowley - Can't wait to see what trouble he'll brew up in Season 8. Like Meg, he's always found a way to not only survive the Winchesters, but beat them in some form or another. He's a great villain and one of my favorite characters on the show.
:: Dick Roman - Well you can't say he didn't go out with a bang. Heh. :P Sounds like killing him didn't take out the rest of the Leviathans, so they'll still be a problem. I hope Crowley was just bluffing there, 'cause really, how does this help things? No easy task for one Winchester brother to tackle on his own. I'd hoped that with the season ending we would have rid the world of the nasty Levis. Season 8 will tell, I guess.

I think that's everything I wanted to say. Phew! Long review this time. :)
Overall, I really enjoyed Season 7, but then I enjoy every season and I hope SPN will have as many more as possible.
Thanks for reading!