LJ was down very early this morning, so I couldn't do my normal, daily posts. If you follow me on Twitter you saw the site I was getting instead. It was frustrating because it seemed I was the only one having problems. I've heard that some people aren't getting notifications, but that hasn't been a problem for me.

Things appear to be okay now though, thank goodness. At least I can post. *knocks on wood*

I'll be making the entries shortly...but first, some breakfast. ;)

A little late, but here's your dose of Jensen for the day. The freckles, the profile, the smile! :D

This cap is from 2x05 "Simon Said".
Click to see the full-sized cap.

Wednesday's cap is for

womanofletters. A cute moment between Dean and Jo (and indirectly, Ellen).
Dean: If I ran off with you, I think your mother might kill me. [gives Ellen a sheepish grin as she glares at him from across the room]
Jo: You're afraid of my mother?
Dean: [turns back to Jo] I think so.
Happy I can post to LJ again...or get on here at all for that matter. I'd like to take a moment to thank everyone for all the comments to the latest SPN Revealed post. I'm always surprised and pleased by how much people enjoy those posts. I hope to have the next one up on Monday.
Another Cap Lottery Week!!!! Here's how this works: Leave me a comment, give me a number between 1 and 819, whatever number you pick I'll match up with that same numbered cap from 2x05 and I'll post it. One number per person please since we've only got a week to do this. ;)
Have a good Wednesday folks! Remember, no new SPN tonight, but it will return next week!!! *hugs*

I'm late for one,

coltshot_1's birthday on April 15th (hope you're doing ok, Mel) and early for another...

elsiecat for April 19th. Well...I try to be on time, anyway. :P Wonderful birthdays to you both. *hugs*

SPN writer, Robbie Thompson ‏@rthompson1138, was taking some fan questions tonight during the East Coast rerun of his "LARP And The Real Girl", so I thought I'd ask him again about a nagging question from 8x17 which he also wrote. 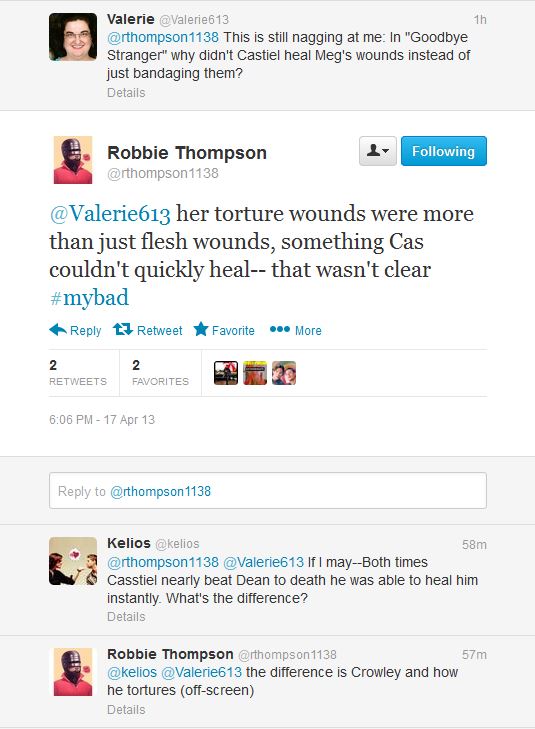 So what I take from this is that Cas can heal wounds he inflicts (Dean in the same 8x17 ep) and those of other angels (Sam/Lucifer's damage to Dean & Bobby in "Swan Song"), and human inflicted damage (Sam after being beat up by Dean in 6x07), but he can't heal damage done by demons. Apparently, Crowley's torture techniques are so severe they're beyond the capabilities of an angel...at least when the angel is short on time.