What's memorable about this scene for me is that Dean doesn't stop at that line at all! He just keeps on going to the parking spot. LOL

This cap is from 3x05 "Bedtime Stories".
Click to see the full-sized cap.

Boys in the sunshine! A rare sight. ;)
Tuesday was an okay day. Spent most of my time fixing and now uploading S8 caps for the Locations List.
So sleepy now. Off to bed with me. >.<
Have a good Wednesday folks. *hugs*

All over my Flist already, but who cares? :P

WHO ARE THOSE CAPED DEMON-HUNTERS?


SUPERNATURAL’S JARED PADALECKI AND JENSEN ACKLES GET IN TOUCH

WITH THEIR INNER SUPER HEROES IN PREPARATION FOR COMIC-CON 2013 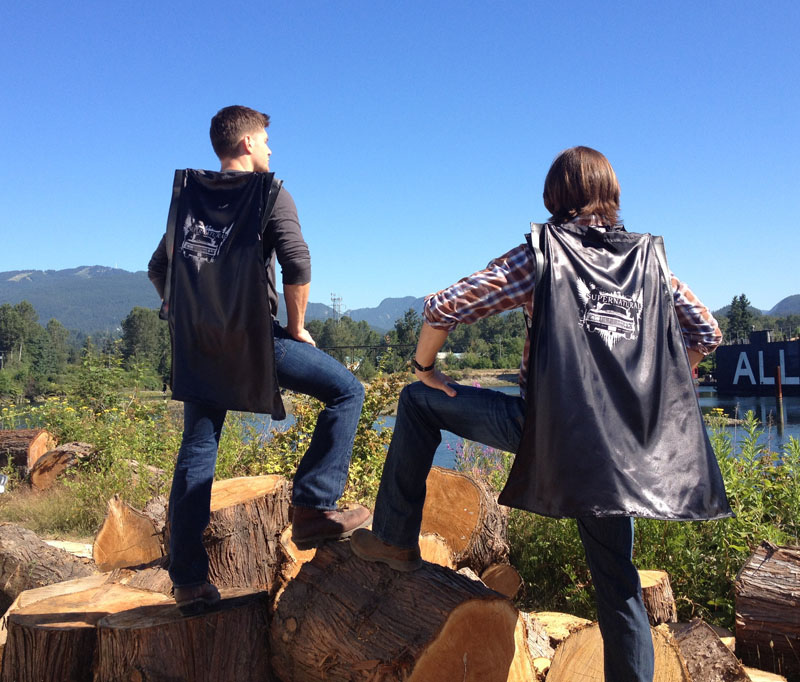 BURBANK, Calif. (July 17, 2013) — Men in … Capes? In preparation for Comic-Con 2013, Supernatural’s Jared Padalecki and Jensen Ackles got in touch with the super hero within by modeling Warner Bros. signature caped Comic-Con backpacks. With production on the ninth season of the hit series just beginning and an appearance at 2013 Comic-Con International: San Diego this Sunday, series stars Padalecki and Ackles took a moment to show off the Supernatural bag and more importantly, to road-test its fashion cape accessory!

To get a closer look at the Supernatural bag as well as images of all the Warner Bros. TV series Comic-Con bags, click here: http://bit.ly/12H1gXG